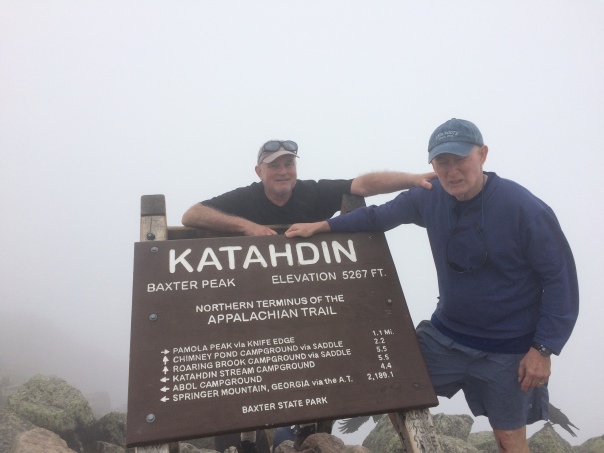 Tortilla Tosser (AKA Tom LeVert) reminds me of Civil War soldiers when he poses for photos looking as if he just witnessed a Biblical tragedy. When I reached the world famous Katahdin trail sign with him recently, I managed a smile, but he — characteristically — mustered a scowl. Little wonder considering we then had to make our way in dense fog across the Katahdin Table Land and scramble down the steep scree and boulder slope known as the Abol Trail.

Tom is now a shoo-inn to complete a 40-year section hike of the AT. Katahdin and Maine’s 100-mile Wilderness were the biggest stumbling blocks in his path, and over the past couple of weeks he completed that section. He has about a week’s worth of hiking remaining to complete what began back around 1977.

The majority of the trek has taken place over the past 15 years. Tom and I have done most of it together. Since I had completed the 100-mile wilderness for the second time years ago and had been up Katahdin three times already, I was glad when Steve Skinner and Eric Graves agreed to hike the section with the Tosser last year. Sadly, Tom got sick early in the hike — a result of dehydration caused by a medication imbalance. He not only could not hike, he had to stay in the hospital for a few days.

So, when we started up Katahdin at 6:30 a.m. one recent morning, Tom — a week short of his 71st birthday — was dealing with a low confidence level. As it turned out, he had no cause for concern. As he, David Hiscoe (a 1973 thru-hiker and mid-60s type) and I hiked up those challenging, rock-strewn slopes, we were passed by scores of young men and women who had started months ago at Springer Mtn. and were scampering upward like young ferrets. We, the oldest guys on the mountain that day, ascended at a much more — shall we say — deliberate pace.

But, by God, we got there. Tom had no problems. He was strong, self-assured and happy to check the biggest box of all for a section hiker. I made him hug me, and since Tom is very uncomfortable with the concept of hugging, it was akin to embracing a bundle of sticks.

Hiking the 100-mile wilderness with him was very hard work. But at night, as I lay in my tiny tent next to northwoods lakes listening to the cosmic call of loons, I realized how lucky I am — at my age — to be active and engaged in the Maine backcountry. I first did the wilderness on my thru-hike in 1973. Then I joined my daughter Laura through the 100 miles in 2004 as she embarked on her SOBO thru-hike. Being out there again was a privilege I will treasure pretty much forever.

It has been an honor hiking with Tom LeVert all these years. Tom is a man of the highest integrity and humility. I describe him as being totally guileless. His Christian faith guides him quietly. He still works for a living and is a respected professional in the field of personal investing. But he also is an expert on history with an amazing general knowledge of world history that would shame many highly placed academics. I have learned much from him by just asking questions as we hike along together. His friendship has been a gift in my life and his example is one I could never imagine living up to. So, old friend, congratulations. You only have to climb Katahdin once to complete a section hike, and I’m glad I did it a fourth time to be with you. Stay vertical and keep walkin’!