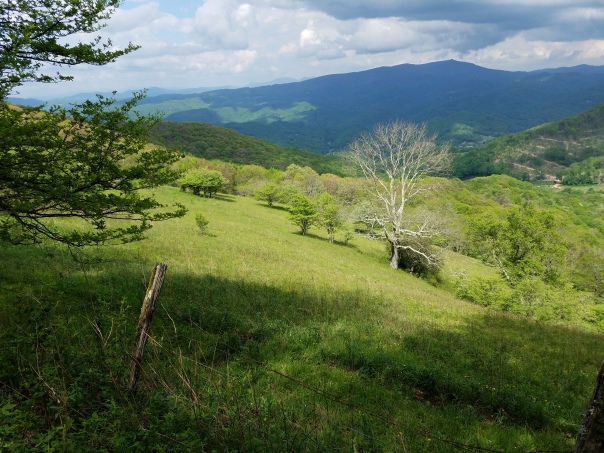 Hiking chum Tortilla Tosser has fewer than 30 miles to go to in his multi-decade section hike of the AT. I spotted him along with Stone Heart and Trailbeard recently from Hwy. 19-E in Tennessee over to Erwin, TN, on the lovely Nolichucky River. Trailbeard does his pix on a Galaxy smartphone, and the results  are lovely.

This shot was taken on the flank of Hump Mountain during a 15-mile hike over a bunch of scenic bald ridges in clear Spring weather. I only hiked part of it, because my job was to provide “spotting” duty. That means I park at a road, hike part way in, turn around and go back to my car and eventually meet everyone at another road crossing. Obviously, this allows the group to put in a full day’s hike with day packs. Know as slackpacking, it’s a time-tested way to take the strain off aging backs.

There are those who think of slackpacking as something other than the prosaic activity noted above. I give a lengthy description of it in my novel, THRU: An Appalachian Trail Love Story. The earliest known use of the term was chronicled by a famed thru-hiker named O.d. Coyote, the fiercest hiker of them all.

O.d. was in the Roan Mountain region with a band of hikers known as the South Georgia Heathens. They delayed their hike to indulge in some tasty pies at a roadside cafe. Baha Heathen admonished the group saying they were not backpackers so much as “slackpackers.” Mr. Coyote later thought about this characterization and determined that if a delay occurs in such a way as to improve the quality of the hike, then it is okay to be a slackpacker. Thus, his lovely definition was conceived and is — to this day — my favorite way to think of the term. Still, when it is applied to the practice used to help Tortilla Tosser get closer to his long-awaited goal, it works pretty well that way too.