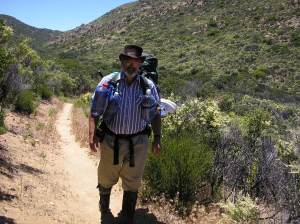 Back in ancient times (1973) when I was hiking from Maine to Georgia, I met a delightful fellow named D. J. Hellie who hiked with me through a portion of the Mid-Atlantic states. D. J. was a bright guy who spent many a hiking mile and rest break conferring with me about nature, Watergate, what he and I were going to do in the future and on and on. Until last week, I had not spoken to D. J. in 41 years. Then, he called and said he was in the Atlanta area visiting his daughter and new grandchild and wondered if I wanted to have coffee. Well, sure I did, and we met at a Starbucks for a couple of hours to catch up on jillions of cubic feet of water under the bridge. D. J. now goes by Doug, and he and I had great fun describing our various adventures. If anyone paid attention to us, they saw a couple of over-sixty, bearded codgers animatedly swapping one exploit after another. Doug sent me some photos and a written description of a hike he took on the PCT in 2005. I have hiked the same stretch, so I was keen to read every word. What I guess I loved most about it all is that Doug hiked that hot, arid stretch in a top hat. The photo above shows a good-humored guy who knows that adventure is always in the cards. You just got to want it. That’s what Brave Phillie said in THRU: An Appalachian Trail Love Story, and he was right. Here’s to old friends coming back into your life. Stay vertical you guys, and keep walkin’.