Before there was THRU: An Appalachian Trail Love Story, there was Bill Bryson’s classic A Walk in the Woods. Rumors have abounded for years about how Walk was going to be made into a Redford/Newman film vehicle. Time passed, and Paul Newman went to the great movie studio in the sky. Redford kept the dream alive, and recently he, Nick Nolte and a huge film crew converged on Amicalola Falls State Park to film part of the movie. From all appearances, Redford is giving old age a good name. Assuming that the movie comes out in 2015, I think we can expect Springer Mountain to be a circus of madness in the spring of 2016 as aspiring NOBOs take on a challenge based on having seen a movie and little else. A big time for some quick character building. You can bet I’ll be there just to watch. Meanwhile, good luck to the Hollywood folk, and if you liked Walk, do me a favor and add THRU: An Appalachian Trail Love Story to your reading list. 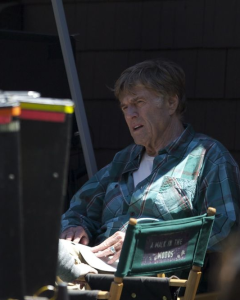 2 thoughts on “Robert Redford Takes a Walk in the Woods!”